I hope you had a lovely holiday season and a wonderful 2017 thus far. Hubby and I did a big loop for the Christmas holiday, first by traveling from Los Angeles to Florida to surprise my 97-year old grandmother for the holiday! She was happy to see us and it was Jake’s first visit to her beautiful hometown of Sarasota.

Next, since we were already on the East coast, we traveled to Ohio to visit with Jake’s family. After a brief stay, it was back to California for some sun and fun.  We’ve had lots of rain since, which is fabulous for combating this multi-year draught, but the cold weather is something we’re not used to. LOL!

Lots of colors and plans this year for AlohaBlu. Firstly, soon I’ll be launching a new shoppe which will have the link AlohaBlu.com.  My Etsy store will still be active and you can find it at AlohaBlu.Etsy.com. I’ve been working on the layout for the past month on the new shoppe and am excited to launch it!! I will be posting new colorways on this one as soon as it’s active.

Secondly, I’m also launching a new Facebook Group: AlohaBlu Yarn & Fiber Luau! I’m hoping to share more about my products, show you a bit about me and AlohaBlu as well as get to know you better! Feel free to join and I’ll add content in the next few weeks.

Ok, now for some colors!! Here are the colorways for January and February:

As I was rooting through Mom and Dad’s vacation photos, I came across this wonderful image of a fountain from their trip to ASPEN, Colorado. I loved the pinks/magentas of the trees, against the green hills with the gray concrete street. I did this colorway as an immersion dye which will result in a random pattern! 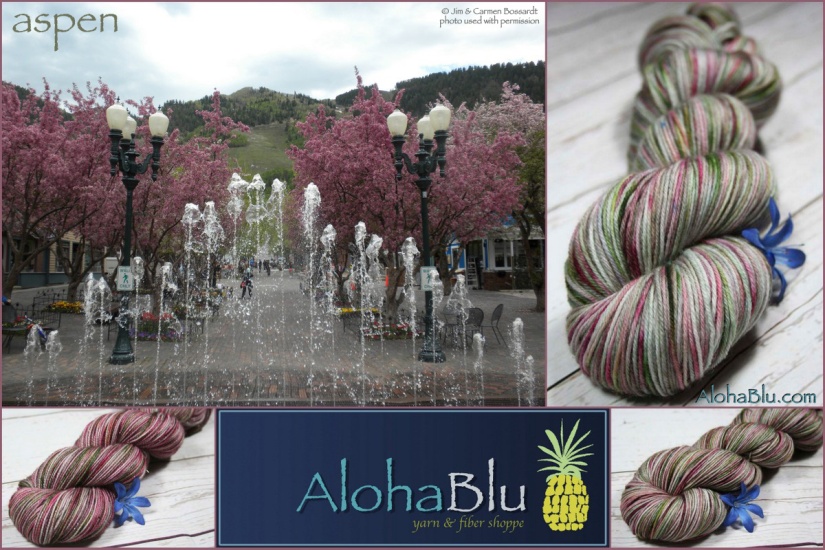 CHESHIRE CAT was inspired by our 16-year old niece’s drawing. When she showed me this image, I immediately asked her if I can make it into yarn (she gave me the quintessential teenage response: a thumbs up). I thought Hannah’s color palette was just amazing and scoured my dyes for the perfect match. 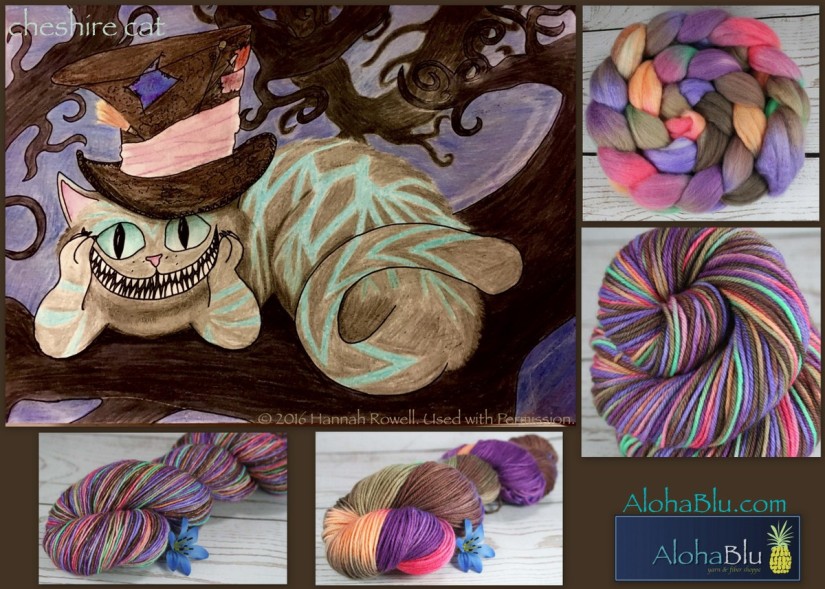 This colorway happen to coincide with the Chinese New Year so that was serendipitous! CHINESE GARDEN is one of the many gardens you can visit atThe Huntington Library, Art Collections, and Botanical Gardens. Here they have acres of various gardens and multiple buildings housing precious artwork. I took this photo of the Chinese Garden, which is artistically designed to combine Chinese culture with Henry Huntington’s style. Learn more about the Chinese Garden @ www.huntington.org/chinesegarden. 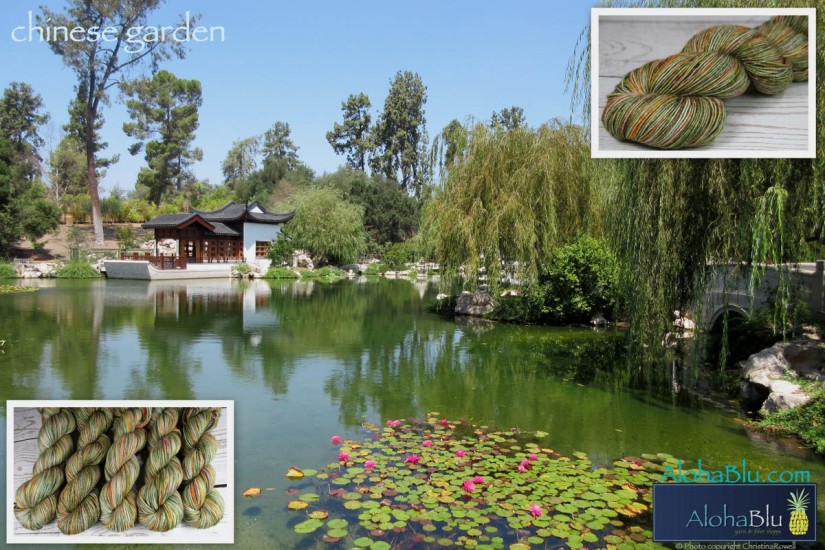 Back in November, during our Maui trip, we had lunch at the Hana Ranch Restaurant which was fantastic! Along one wall was this whimsical display of colorful UKELELES, and of course I thought of yarn immediately. 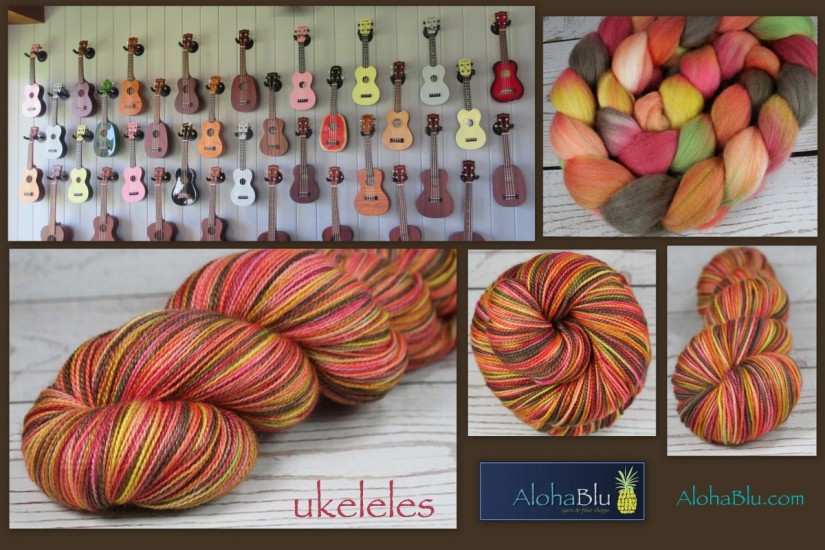 I touched on this colorway in the previous post, then decided to add it to the shoppe so I created a few more skeins of STUDIO CITY SUNSET AT VENTURA BOULEVARD, clearly one of the longest titles I’ve yet to manage. 😉 My hometown of Studio City was aptly named since many movie/tv studios used to be housed here. Over time, most of the studios dissolved but there is still one here today. CBS Radford Studios is located near where I took this photo and produced some well-known TV shows in its 91 year history: Gunsmoke, Gilligan’s Island, Mary Tyler Moore, Hill Street Blues, Seinfeld, 3rd Rock from the Sun, CSI: New York and That 70’s Show to name a few. It’s always fun to watch some of these shows and see our happy haunts on screen! 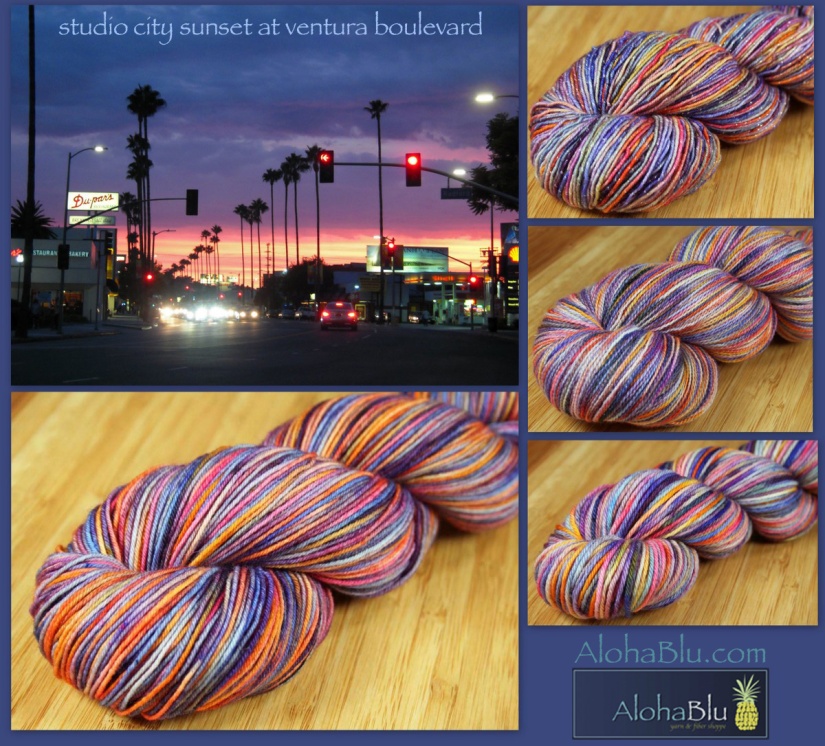 Another colorway inspired by our latest Maui trip: HAWAIIAN MACARONS. Jake and I visited a gourmet market at the Shops at Wailea and in the display case were these wonderful confections with names like Cookies & Creme, Guava, Melona, Mango, Toasted Coconut & Lilikoi. I knew I had to create a colorway for them. 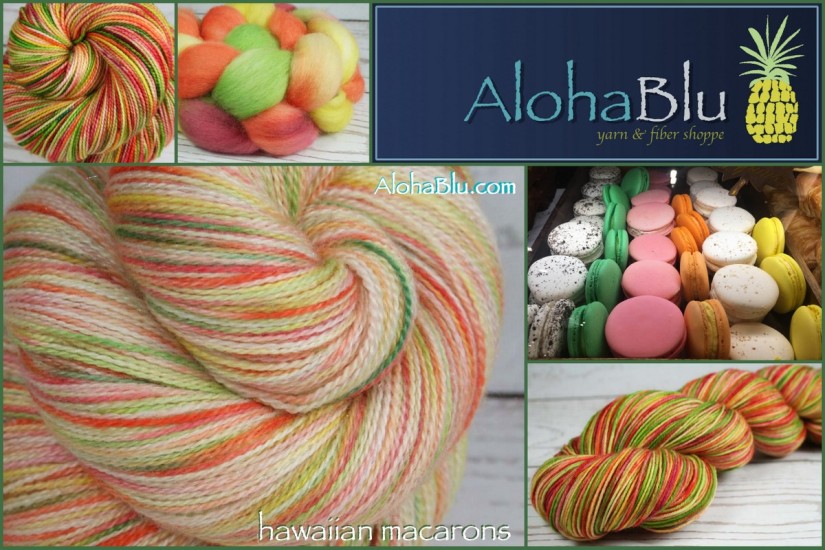 For Valentine’s Day 2013, my hubby gifted me a box of chocolates, handmade by a local artisan. They were so pretty that I had to take a photo of them and didn’t want to eat any of them. Eventually I did of course and they were amazing!  I re-create BOX OF CHOCOLATES each year for Valentine’s Day. 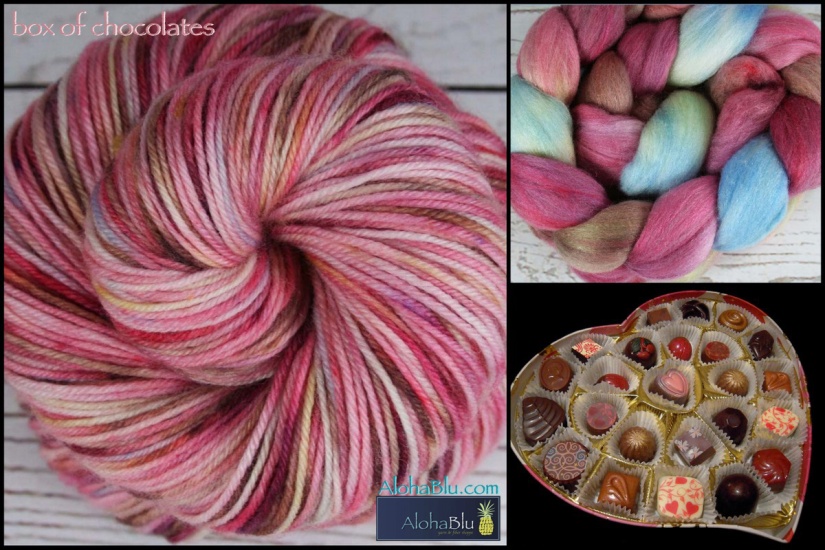 Another one of my parents’ vacation photos, EVENING AT NANOOSE BAY, was taken in Beautiful British Columbia. I’m such a big fan of shades of blue so I was eager to dye this up. When Dad told me this was one of his favorite photos, I wanted to be sure I did it justice. (He did like the end result – whew!) 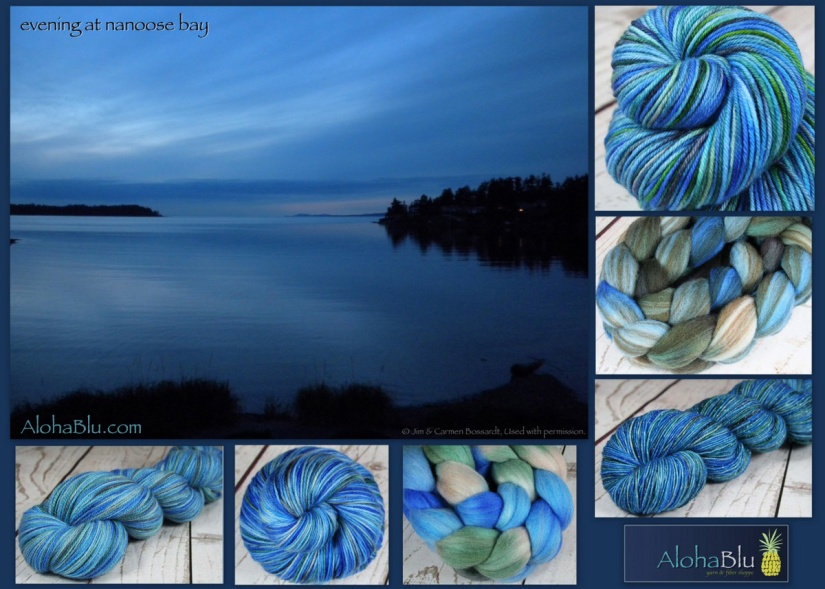 My most recent colorway was inspired by hubby’s photo from our trip out to Bryce Canyon National Park in Utah. We arrived mid day, with the sun overhead so it was illuminating the bright red/brown/orange rocks and the ridges below. We’d love to visit again during warmer months, though WINTER AT BRYCE CANYON, was rather pretty! 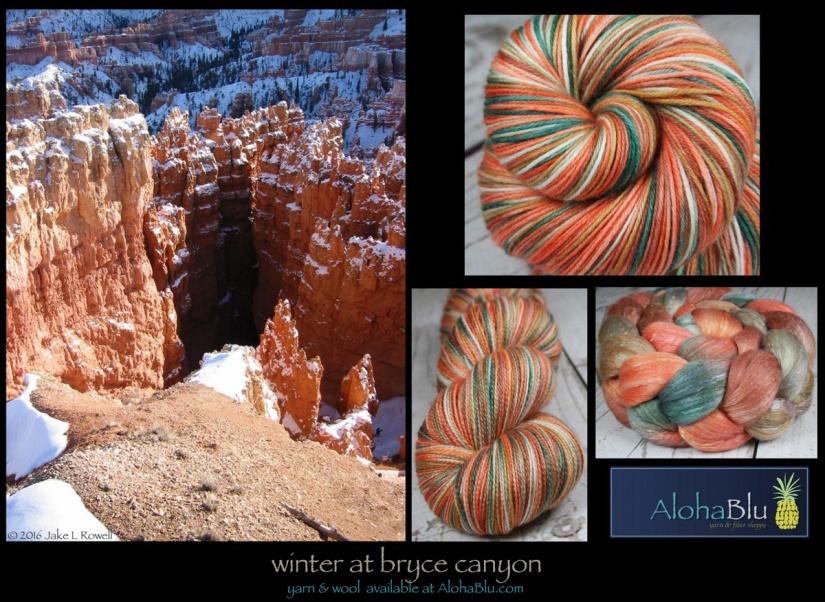 In my next post, I’ll share some of my finished projects (5 pairs of socks knitted so far in 2017) and new updates!

Aloha and E Komo Mai! Please check out my blog to share my love for Hawaii, knitting, photography and travel. . . View all posts by AlohaBlu