One of the things I like to do before I go on a trip is to check out FoodNetwork.com and see if there are any ‘famous’ places to check out. Of course there are the Zagat rated places but we love visiting Mom-n-Pop shops that have tons of character and history.

When chef Guy Fieri finally visited the islands for his show, Diners, Drive-In’s and Dives, I recorded the program and mapped out each place so we can go there on our next trip. We were able to visit 2 of the places he went to (one more than once!) and was so glad we did.

Here are Ono Grindz (good food) from Oahu – some famous, some not-so-famous, but all very very delicious.

Our first stop whenever we land is GORDON BIERSCH BREWERY @ Aloha Tower. Yes, they do have GB’s on the mainland, but they don’t always have the same things. Our favorites are the Ahi Poke and a new dish, the Cajun Ahi Taco, crispy and soft with a great sauce on top.

If you’re craving a hamburger, our favorite is TEDDY’S BIGGER BURGERS. These burgers are served with Teddy’s sauce which is sort of like Thousand Island, but not quite. And their onion rings are killer. They have a number of locations on Oahu and Maui, but started branching out to the Mainland and even one in Japan. We visit Teddy’s quite often . . .

Keeping with the ‘handheld’ theme, this next place was one that Guy Fieri visited. The POKE STOP has two locations on Oahu and we visited the Mililani store. It’s about a 20-min drive from Honolulu but totally worth it. We got a 1/4 pound each of 4 different types of poke (which is an appetizer made with cubed raw fish mixed with spices or soy sauce), then decided we were still hungry and went for the OMG Burger, made with a beef patty topped with creamy spicy ahi poke on a taro root bun (that’s why it’s purple). GASP!

The photo doesn’t do it justice, but it was to-die-for. So much so we went back two days later and had another one . . .

Speaking of fish, let’s talk sushi! No better place than the islands – ok, maybe Japan? – to get fresh fresh fish! Here are some of our faves.

In Honolulu, CALIFORNIA BEACH ROCK N’ SUSHI, is one of those place where you can’t seem to eat enough. It was there we first had hamachi sashimi with chilis and ponzu sauce, that was 10 years ago, and now that dish is everywhere.  We tried a new roll this past visit called a Tamanaha Roll, crunchy crab roll topped with their spicy tuna tartare mix.

We tried out a new restaurant called UNCLE’S FISH MARKET & GRILL. Well, ok, this one IS Zagat rated and we loved it so much, we went there twice! They are known for their Poke Tower which is kind of like a layered dip, but with poke, avocado and rice. So pretty!

If you want a more normal poke experience, try their Uncle’s Special Poke with cubed ahi in a rice ‘bowl’. 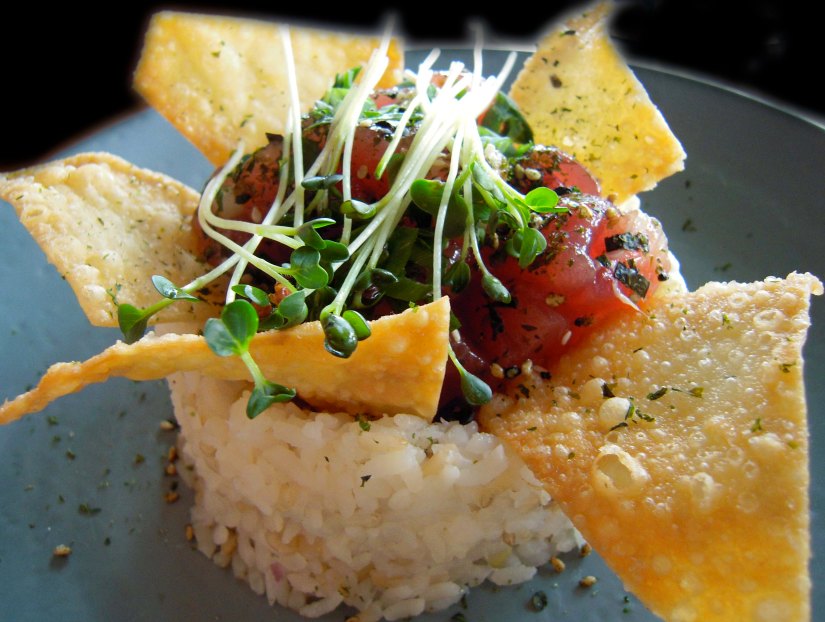 In the same area as Uncle’s is our second “Guy Fieri” stop. It’s called Nico’s At Pier 38 and there is always a line! It’s a plate lunch restaurant which means you get amazing food in a to-go carton and you’re hoping someone will get up so you can snag a table before your growling stomach becomes too much to bear. They were constructing a new building when we were there so I’m sure they’ve expanded by now. This was one of their specials, Ahi Furikake, a tuna steak cooked with herbs, spices and sesame seeds.

I have to end the seafood portion with probably the most amazing dish on the island. I know that is saying a lot, but we LOVE this dish and it was one of the first places my now-husband took me to when we first started dating. GIOVANNI’S SHRIMP TRUCK in Haleiwa is one of the places you probably look at and think “Ew, why would anyone eat there?” then you would see the crowd of people waiting to order, the crowd already eating and the gala of cars parked every which way around the truck. Their most famous dish is their Shrimp Scampi – a dozen huge shell-on shrimp cooked in garlic-y sauce, accompanied by two scoops of rice topped with crunchy fried garlic bits. 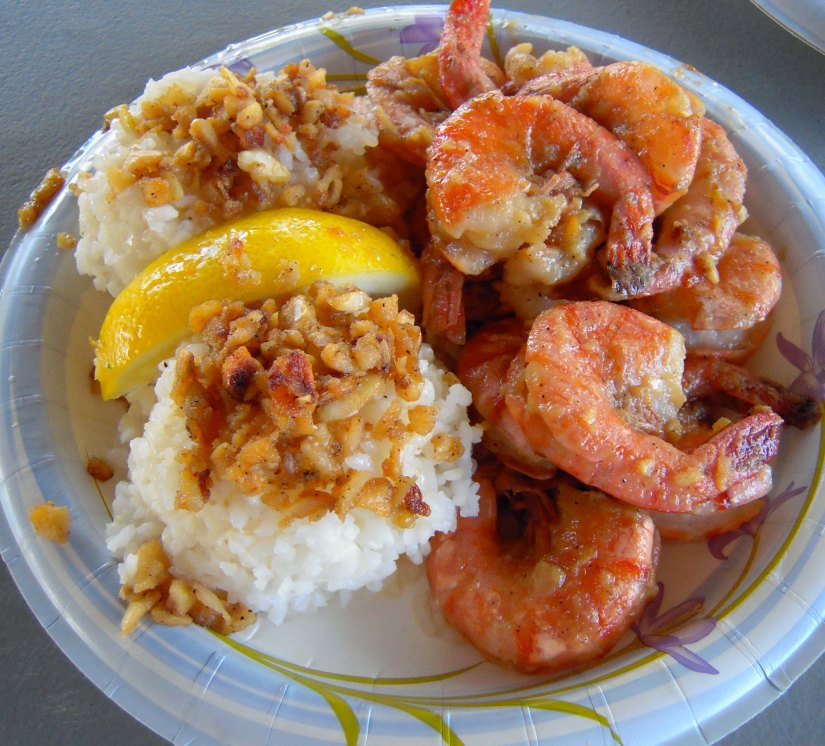 It is sheer heaven, but bring your own wet-naps! I used to share a plate with hubby but now we just order our own. They used to sell their bottled scampi sauce online and Mom and I would get them shipped to us here in CA. They have since stopped and every time we go back to visit Oahu, Mom makes me check to see if they started bottling it up again but so far, no go. Coming to Giovanni’s is an experience and be sure to bring a sharpie marker to memorialize your visit on their truck. We’ve done it many times – here’s our 2011 signature:

I have some desserts to post but am thinking that will be another day. . . Enjoy!

Aloha and E Komo Mai! Please check out my blog to share my love for Hawaii, knitting, photography and travel. . . View all posts by AlohaBlu